There’s a new product coming out soon, and we at Human Diaries have been lucky enough to have the opportunity to try out a prototype.

When I first heard about the RokPak, it sounded like such a good idea. I was quite intrigued by the concept before I even saw one in person, and was very excited when I found out we were going to get to try one out. I am happy to report that it definitely did not disappoint! It’s a portable charging unit, but the unique features it has make it special and unparalleled. First of all, it charges from several different sources. The solar panels allow you to charge it from the sun, or from almost any light source. The blue indicator light lets you know when it’s charging. But there’s also a port in it that allows you to plug it into the wall or a USB port if you need to charge it, and don’t have a good way to do it with light. We’ve charged it using our ‘cigarette lighter’ adapter in the car while traveling at night. The possibility of charging the unit through so many different ways adds a flexibility we haven’t seen in other chargers. It also holds much more power than the average portable charger, so it can last much longer between charges. RokPak can charge from the sun while you’re outside, even if you’re charging something in the RokPak, so you don’t need to worry about running out of battery power if you’re nowhere near an outlet. I don’t know of any other portable charger that can do that!

Another awesome feature about RokPak is the waterproof design. When closed, it is completely waterproof. We tested out this feature when we were out on a motorboat one day. We literally held it by the carrying strap and dragged it through the water. When we were done, we opened it and checked. Completely dry inside. The creator of RokPak also designed it with enough room inside for personal items. Oh, it even floats in water. You can put your keys, wallet, passport, and phone inside it, and not have to worry about them getting wet. While surfing or boating, for example, your items will be safe – they’ll stay dry, and will be floating if you drop the RokPak. Also, when it hits the water, RokPak emits a flashing light signal so it’s easier to find (there is a switch to over ride this feature if you want, though). Then, when you retrieve it, you can even recharge your phone if you need to call for help! If you’re somewhere there is no cell phone signal, you can simply use the flashing SOS light feature to signal for help. You can charge a smartphone up to 8 times before having to recharge the RokPak. There’s a quick and easy way to check to see how much battery is left, so you know when it needs to be recharged.

I was surprised to learn that if your phone is closed inside RokPak to charge, the flashlight will pulse to let you know when your phone gets a notification or call.

The waterproof design also keeps out dust, dirt, mud, and even sand. That is a really good thing when participating in so many outdoor activities. Sand in electronics is a major problem that RokPak can help you avoid. No worries when hiking or camping during a rainstorm! Keep your personal items clean and dry! If you happen to accidentally drop the RokPak, the cushioned interior will keep your items protected.

It’s available in camouflage, safety orange, or marine blue. It’s ideal for outdoorsy people – it’s perfect for hiking, biking, camping, fishing, hunting, and so many other activities. It includes a carabiner so you can attach it to a backpack. It has a 4 function LED flashlight, which is a very useful feature. It works in extreme heat and extreme cold. But you don’t need to be an extreme person to have a need for a RokPak! It will quickly charge your devices in any situation. We’ve even used it on vacation or shopping trips. Many times, we’re out and about, and realize that someone’s phone battery is really low, so we simply open the RokPak and plug the phone into one of the two convenient USB ports inside. We’ve even charged two phones at once! One time, my iPhone battery completely gave out while I was taking pictures on an assignment. I was so happy I had the RokPak with me! I carried the open RokPak around with my phone plugged in. As soon as the phone charged enough to turn back on (which only took a minute), I was able to resume taking pictures while the phone continued to charge!

The prototype that we have has been through a coal mine, a cave, on planes, and numerous outings. It’s even survived being used by teenagers!

RokPak is scheduled to be available in mid-2016, but you can find out more about them at RokPak.com today. Their campaign is scheduled to launch on Kickstarter on March 28, 2016. Make sure to check it out! 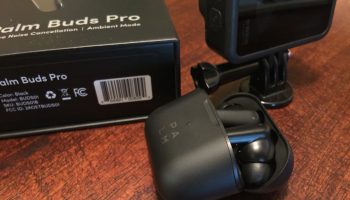