Well, now that we’ve had both of our cats for more than a month, I can definitely say they’re quite settled in and very comfortable.  It took a little time, but now they are getting along.  Oliver has to be reminded to share the food with Boris sometimes, but they’re good friends.  We have all adjusted to each other – cats and humans alike.  Boris and Oliver are both quite playful – especially Oliver.  Especially first thing in the morning; very early.  They like to interact with each other, and with the humans, too.

Oliver gained some muscle since he’s gotten here, and doesn’t seem wobbly like he was at first.  We think his time sitting in the cage affected him.  We know the cats at the adoption place were taken out sometimes to play, but now that the two of them are here and they have the run of most of the house, they keep each other more active.  They run around and wrestle frequently, which is great exercise.  Boris has toned up, too.  They both seem happy and healthy, which is wonderful.

To make things a bit easier on the humans, we bought an automatic feeder for convenience and portion control.  They get fed at the same times (and the same amount) every day, even if we’re not here, or we happen to get the chance to sleep in.  Also, we like that they don’t connect us with food; we don’t feed them, the machine does. They also have a water cooler type pet bowl which ensures they always have plenty of fresh water.

We bought a potty training system in hopes of someday getting rid of litter.  They’re making progress with it, and we think they’ll be done within a few weeks.

There are still some adjustments and occasional bumps in the road.  Boris made a run for it one night when a friend was leaving.  That was rather scary!  We did get him back into the house, but it took a while.  So, now we’re building something to prevent them from slipping out again.  We’re also working on building a scratching post/tree house type of thing for them. We’ve made them some toys, which they really seem to like.  Just like kids, they seem to prefer boxes to toys, but they do like their toys.

We put some upside down carpet protector on the dining room and kitchen tables, and the kitchen counters.  For the most part, that keeps them away from those areas.  The most important things are to make sure to put away leftovers right away, and clean off the table and counters.  Dishes need to be washed or put in the dishwasher immediately after we eat.  I’m sure they sometimes go on the tables or counters, but between the uncomfortable surface and nothing interesting to see or smell they won’t waste much time there.

They also don’t like to have their nails trimmed or get baths.  It kind of reminds me of when I had to clip my kids’ nails and give them baths years ago!

The cats like to sit on the couches, the chairs (especially ones with cushions on them), or any place that’s carpeted, or soft.  They also really love the windowsills, especially Boris.  We realized that he’s not just watching the cars and people go by; he’s also watching the birds fly past.

We’ve been mainly successful with getting them to be most active during the day, and sleeping at night.  Sometimes, they do like to start meowing for our attention long before we plan to wake up for the day.  We make sure to ignore them then, so as not to encourage that behavior.  After a minute or two, they will go back to playing with each other, or napping or whatever.  They (and we) do make sure we play with them when we’re awake, though.

The best times are when they sit next to you on the couch, and purr while you pet them.

Over all, it’s been very enjoyable to have the little guys around. We’re all very happy we made the decision to adopt them! 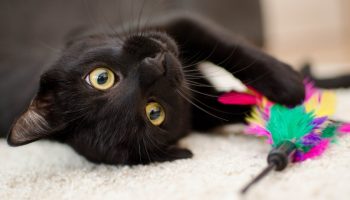 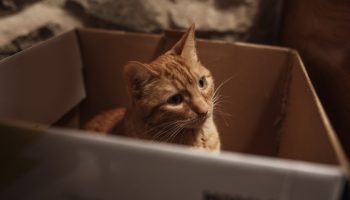