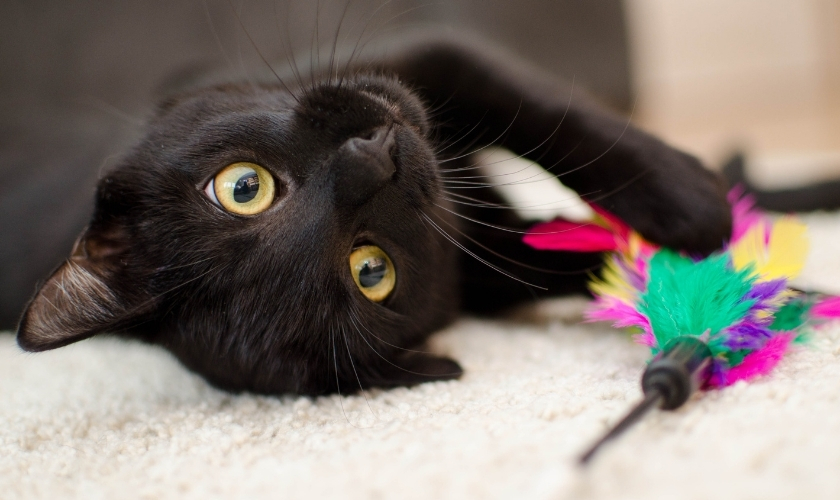 When you have cats – especially younger cats – you need cat toys. If you go to a pet store, or any other store that carries pet food and supplies, you will almost definitely see a wide variety of pet toys.

When we were still in the planning stages of adding cats to our home, my youngest decided that she wanted to make a toy for the cats. She took a stick from the back yard and attached several lengths of elastic to it, and even tied some fuzzy toy mice we bought to some of the strands. We tried it out once the first cat arrived, and it was a hit! It lasted for about a month before the stick broke. By then, the fuzzy mice had come off, and a few of the strands had been removed as well. It was popular with the kitties right up until the end.

They also love the ping pong balls and tape balls we gave them. I balled up some packing tape, making sure the outside wasn’t sticky at all, and made several tape balls. They love batting those around. They like to bat around balls of paper or foil, too. The ping pong balls are best when they’re thrown towards the top of the stair case, so they can bounce down.

However, it was time to make new toys, especially after the demise of the original homemade stick toy. I had been thinking of picking up some wooden dowels to replace a few parts on my drying racks because the original ones had cracked. It just so happened that I passed an arts and crafts store within a few days of the original cat toy breaking. I bought four of the dowels for under $5, including tax. When I got home, I measured carefully, and then sawed off the extra parts. There was plenty left after I used what I needed for my drying racks.

I took the pieces of wooden dowel that were left, and tried to figure out what to attach to them. I also wanted to figure out a way to make them more durable. The dowels were stronger than dried sticks from the yard, but I wanted the attachments to stay attached.

My husband was doing yard work while I was working with the wooden dowels. At one point, he came in to cut pieces of cord for the weed whacker. I laughed when I saw one of the cats (Oliver) attacking the cord as he pulled it out of the container. There was my answer! I asked him if I could have a long piece of it. He cut off an arm’s length, and I went to work. I placed several inches of it against the end of the piece of dowel, and then used electrical tape to secure it. I started wrapping several inches before the start of the cord, and made sure to overlap as I went. I covered the part of the cord that was on the dowel, and then went about 2 inches over the end of the cord that was off of the dowel. Then I used another piece, starting from the other end, and covered the first piece. I wanted to make sure the cord doesn’t come off.

I took another piece of leftover wooden dowel, and tied a long piece of elastic to it, leaving several inches free on the other side of the knot. I used the electrical tape again in the same way, so that the elastic would stay. Then I took one of the ping pong balls and made two small holes across from each other. I made one of them a bit bigger. I threaded the free end of the elastic through the smaller hole, and then pulled it out through the bigger one. Then I tied a double knot, and poked it through the big hole. Now the knot was inside the ping pong ball – it’s too big to go through the small hole.

Then I took another piece of dowel and attached several long pieces of elastic to it, including the pieces from the original toy my daughter made. The toys have lasted for about a month now, and I’m happy to report they’re still in good shape even though we use them every day.

Oliver prefers the toy with the orange cord, and Boris prefers either the one with the elastic pieces or the one with the ping pong ball. They love to play in the morning, so I sit on the couch with one toy in each hand, and sweep them around and bounce them up and down. It’s fun to watch the cats chase after them!

Too Much of a Good Thing?

The week of one cat