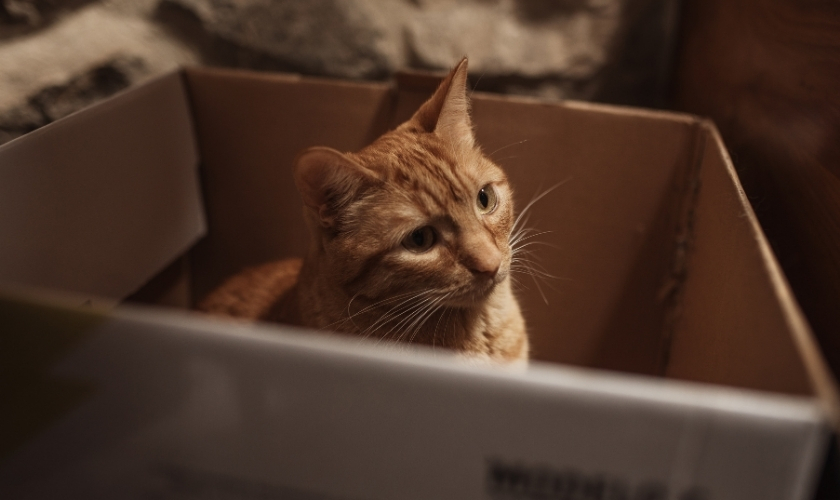 My cats are so funny. Like most cats, they enjoy boxes and bags. It’s rare to find paper shopping bags nowadays, but we have lucked into a few of them. Whole Foods and Trader Joes are two places we can still get them. I just remove the handles, place the bags on the floor, and then watch the cats hide in and play in them. It’s fun to tap your finger on the bottom or side of the bag and watch the cat lunge at the movement. Just be careful if your cats have claws!

I’ve also given them some boxes from packages, or even the ones that held a case of copy paper. They’ll just sit in them. Sometimes, one will get inside a box with flaps that we put on its side, and the other will poke into the box at the one in there.

One day, I put out some copy paper boxes and set the lids down beside them. After a while, I saw one of the cats (Boris) sitting in one of the lids. On impulse, I decided to push him around in it to see how he’d react. He just sat there like a king and let me push him! It was an amusing sight. I got tired of pushing him around after a while, but he seemed like he still wanted to ‘ride’. My husband came up with the idea of poking holes in the lid and attaching some twine in a big loop. Then we were able to pull Boris around easily. It was almost like pulling a wagon, except it didn’t have wheels, of course. Then Oliver decided he wanted to get in on the action. I saw him sitting in the other lid. I came up with the idea of attaching the two lids together, which my husband did. We laughed so hard, watching those two cats sitting in those lids, while my husband pulled them both around. We now call it the cat train. When one of the cats sits in one of the lids, we’ll say, “All aboard”, and then start dragging them around. The video we shot of this is not the best; we were laughing, so we weren’t able to hold the phones or camera very steady! We also have pictures of them in their train. The box lids are starting to get a bit worn, but they still love to go riding around the house sometimes.