Many people have a beloved toy or blanket that they carry around as a child. I wonder how long most people keep them. I’m sure I don’t hold the record, but I’m probably in the top ten!

For my first Christmas, when I was about six months old, one of my presents was a stuffed animal from my maternal grandmother that I ended up calling “Cuddles”. I carried it everywhere – it was my comfort toy. Even once I got too old to carry it, I still kept it. I got even older, and it ended up getting packed in with my things when I moved out on my own. For some reason, I still have it after all of these years. Cuddles and I are edging closer to 50, and we’re still together.

Cuddles showed up in various pictures in my first photo album. We napped together, played in a box with other toys, sat in different chairs (including one on a plane) together, and even spent time in the hospital together. Cuddles wore a diaper at least once, and I even lovingly powdered her!

Apparently, I insisted as a child that Cuddles walked and talked – but only when no one was around, I said. At some point, Cuddles acquired a dress that I think was from a Raggedy Ann or some other doll. Cuddles and the dress are a bit threadbare and falling apart at this point. When I was probably about eight years old, I remember my mom telling me she was afraid to wash Cuddles anymore – I’m sure she was right that poor Cuddles probably wouldn’t make it through another trip through the clothes washer! I’ve considered hand washing, but haven’t been daring enough to try it yet.

So, I decided to take stock of poor Cuddles’ health. All of the lining and some of the ‘fur’ is gone from her ears. They’ve been sewn back on, and need to be sewn on again. Her right eye is scratched. Her nose is flattened back against her face. Her mouth consists of a few strands of red thread that I have a feeling were sewn on by my mother more than 35 years ago. Her entire body is quite flat. It looks like her arms have been sewn back onto her body. She has had various holes sewn shut, and many of the repair jobs are coming loose and probably need to be redone. Her color isn’t quite the same – and has gone from white and beige to an indescribable brownish grayish or something. Of course, the red ribbon has been long gone. I don’t even remember it, but saw it in some old photographs from the first month or two after I got her. I guess Cuddles and I have some things in common.

I wonder if maybe it’s time for a make-over for Cuddles? I don’t know. I kind of like her the way she is. 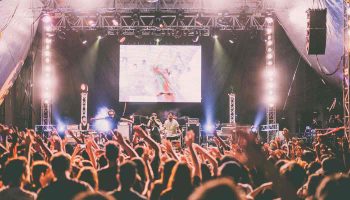 exciting and vibrant in Night of music student festival

An 83-Year-Old Woman’s Letter To Her Friend