There is a place in California called Living Free Animal Sanctuary. It’s an amazing place – a large, privately owned open space for rescued animals to run free in safety until they find a forever home. It is a cage-free environment, which is a wonderful and quite unusual characteristic of this incredible place. Since Living Free was founded in 1980, they’ve saved the lives of countless dogs and cats that would have otherwise been euthanized. They’ve also placed many of their furry guests in forever homes, as well as promoting awareness and education about pet ownership, unnecessary animal euthanasia, puppy and kitten mills, and other important information.

One story that illustrates the reason for their existence is the story of Sheila. Sheila is a 5 year old American Staffordshire Terrier Mix. She spent about 2 years in a shelter, where she only occasionally had the opportunity to escape her tiny enclosed area which barely allowed her to move around. There was a volunteer who would visit her and take her for walks. Although that was a wonderful escape for Sheila, it wasn’t as often or as extensive as what she needed. Since arriving at Living Free, Sheila has the opportunity to run at full speed without any restrictions, which makes her feel alive! As Living Free mentions in their post about her, “She joyfully leaps and sprints through Give Life Park, a park that has given her a new life”. I think it’s safe to say that it’s actually Living Free who gave her a new life! While Sheila is hoping for a forever home, being in such a free and relaxed environment at Living Free is a much needed and deserved improvement over being penned in a small space in a shelter.

Interested in additional information? Learn more about Sheila, and many other pets at http://living-free.org/ . They’re also on Facebook at https://www.facebook.com/livingfreerescu. Read about the organization and the animals, and consider donating to their worthy cause; maybe even adopt a new friend or two. 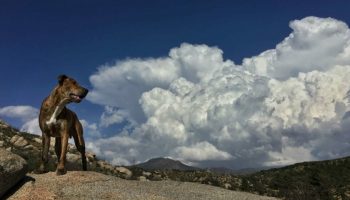