Preheat the oven to 400 degrees F. Soak the lasagna noodles in warm water.

Heat the oil in a large skillet over medium heat. Add the garlic, onions and salt and pepper. Cook, stirring occasionally, until the vegetables are tender and browned, about 10 minutes. If the mixture becomes too dry, add a tablespoon or two of water.

Meanwhile, stir together 1/2 cup of the milk and the cornstarch in a small bowl until smooth. Heat the remaining 3 1/2 cups milk in a large saucepan until bubbling. Stir the cornstarch mixture into the milk and bring to a boil. Simmer, stirring, until the milk thickens to the consistency of a thin batter, about 5 minutes. Stir in the onion mixture, spinach, parsley and nutmeg, and cook until the spinach wilts. Season with salt and pepper. Remove from the heat.

Bake for 40 minutes. Uncover and sprinkle the remaining mozzarella over the top. Bake until bubbling and the squash is tender, about 15 minutes. Let stand at least 10 minutes before serving. 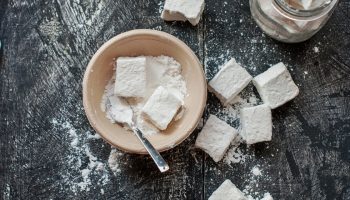