The staff of Human Diaries had a low-key vacation day one day. We had plenty of fun, but at a much slower and more relaxing pace than the day before that. The next day, Tuesday, August 4, 2015, was the day we finally had the chance to travel to Ohiopyle. We were hoping to do several things, but they’ll have to wait for another time. The rappelling, it turned out, was only on weekends. White water rafting was only in the mornings, and it was going to take 3-1/2 hours to get there. We were happy to find out that the main thing we wanted to do, spelunking, was still a ‘go’.

Of course, there were other small adventures awaiting us while we drove to and from our destination. The first one was a deer running across the road. I only got one picture, and it’s not very clear. For part of the trip, we blew bubbles in the car. As long as they were kept away from the driver, it was okay. That was a fun way to spend part of the long drive. Most of the time, we looked out at the scenery and took pictures.

At one point, we saw a small turtle crossing the road. Fortunately, this was not on a major highway, so we were able to safely turn around. Staff member John quickly ran into the middle of the road and grabbed it and brought it back to the car. It was a tiny snapping turtle, about the size of a person’s hand. We still had to be careful despite its size, because they can and will bite! Of course, we took pictures of it. We found a safe spot to release it, very close to where we found it; less than ½ a block from where it was on the road, there was an area on the corner with grass and weeds. Much safer than the middle of the road!

Near the end of our car ride to Laurel Caverns, there was another surprise – a baby black bear running across the road! I tried to get a picture, but I just missed it. All four of us saw it, though, which is wonderful. For two of us, it was the first time seeing a bear in person, out in the wild. It was only my third time, I think.

We got to Laurel Caverns around 1:30, about ½ hour before the last tour. Our guide’s name was Bernie. He went over the rules with us, had us sign waivers, and gave us our hardhats. I really appreciated those hardhats, starting not long after we got into the cave! I really lost count of how many times I hit my covered head on something in that cave!

I found out later there are regular walking tours that start later, but not the type of tour we had. There are several rules (and some strong recommendations) for spelunking. First, we had to have flashlights – at least two per person is the recommendation. Long pants and long sleeves are needed. Footwear that supports the ankles and had good traction is a must. Since we didn’t all have all of those things, we had to go on the upper path instead of the lower path. This was not the experience I imaged. I thought going to a cave meant walking through on smooth paths, looking at the walls and other sights. That’s not exactly how it turned out, though.

I was concerned about our phones getting wet inside the cave, so we put each one in a zipper sandwich bag to protect it (but still sort of be able to take pictures). Some pictures didn’t turn out because of the plastic, and some didn’t turn out because of the dust in the air. When it seemed okay to do so, we would temporarily take the phones out of the bags to take pictures (but not videos, since they’re not allowed). Sometimes, though, those bags really kept our phones dry and safe!

The beginning of the tour was what I had expected. There was a smooth trail and lighting overhead. Not much later, though, we were in a much different setting! I enjoyed it… most of the time. Sometimes, we were walking, but other times, we were crawling, scooting, and trying to fit through what seemed like impossibly tiny spaces. One area was called the “flying V”, and we had to roll through it. At least once, I had to kind of roll over and shimmy on my back to get through. It was also the first time since the 80s that I had done the low crawl, and was very happy that I remembered how and could still do it!

The rock formations were amazing. We saw rock, sand, clay, and some water. We even saw some moss in a few areas. Every so often, there were lights, but some places were only lit by our flashlights. Some of the permanent lights were different colors. One time, we all gathered together and turned off all of our flashlights for 5 or 10 minutes. It was very interesting to be sitting in total darkness!

In one place, we saw where people had written their names on the wall long ago. Some had dates as far back as 100 years ago or more! The oldest date we saw was 1916, but we were told that in another area, there were some from the 1800s!

I really wish we had been able to go rappelling inside the cave. I only had the chance to go once before – outside, not in a cave. I really enjoyed it, and hope to get another opportunity – whether in or out of a cave!

There were a few natural entrances, and we were able to look out, get some fresh air, and take a few pictures.

John used the LED flashlight on the Rokpak for a while, and we must say that the light was nice and bright to light his way! We’re happy that we didn’t need to use the SOS light, though.

At one point, we were all invited to grab some of the clay to make mini sculptures to put on the natural ‘shelves’ around us. I made a peace symbol, and almost stepped off the ledge when I was placing it! Bernie had warned us to be very careful about where we step, but at that particular moment I was looking at the ‘shelf’.

Since Joseph had been there before, we already knew that there was a little sort of waterfall where you could drink some cave water. We were allowed to fill some empty water bottles we had with us. I was surprised with how good it tasted. Bernie told us it naturally has minerals in it, which makes sense. He explained that the water is tested frequently (and had been recently), and there was never any problems with it. It came from the rocks where no air or anything could get to it.

One of our staff members got stuck for a while. I took her hardhat (there was nothing anywhere near her head at the time), glasses, and flashlight so she could wiggle out unencumbered. No, I wasn’t the person who got stuck. I just went a little too far up a rock instead of taking the lower path, and then had to back up because I couldn’t go forward anymore! Well, sometimes the higher points were easier, and sometimes the lower ones were. That time, I picked the wrong way. I had a bag with a bottle of water and some extra flashlights, and sometimes I had to hold it with my teeth while I crawled so I wouldn’t have it get stuck under me!

I made a joke right after one particularly difficult spot that no one over 30 should be allowed to go into the caves!

When we finished our journey through the cave, we were covered with sand, dust, and dirt. We were slightly damp in spots. We had our delicious cave water to share. We were definitely worn out, but elated – we did it! It was an amazing adventure.

On the way back, we passed through villages with interesting names such as Flat Rock and Chalk Hill, and saw signs labelled W. Mud Pike, and Green Acres Road. We stopped at Sheetz for gas and those incredibly yummy Gardner’s Peanut Butter Meltaway bars. I noticed that the younger half of our staff fell asleep within an hour after we left Laurel Caverns.

When we finally got back to where we were staying, we all happily took showers. There was no arguing – everyone was more than happy to get their turn. Everyone also was happy to go to sleep.

The next day, we had to head home. We enjoyed our little vacation with all of its fun adventures and interesting sights, and look forward to the next one!

Anne Sullivan – The Triumph of the Human Spirit 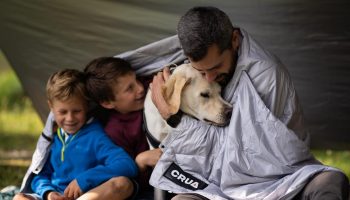 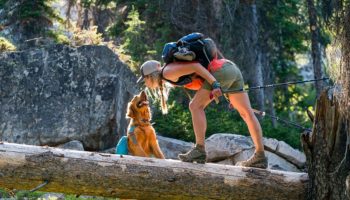